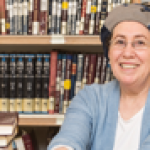 Modern Orthodoxy[i] like most other religious communities has been affected by the feminist movement in modern times. As in the secular community, Modern Orthodox women are now more learned and more active in the community.[ii]  Stages in a woman's life are now openly celebrated in the Modern Orthodox community and there is a growing demand by women to be more active in spiritual ceremonies especially those involving prayer. (Fishman, 2001a). Religious women are now alsotaking leadership roles not only in the secular professional community but also in the religious community. While the highest status for a woman was once leading a girls' high school or being an active rabbanit (wife of a rabbi), today women can become to'anot – trained experts who argue on behalf of women in the rabbinical family courts in Israel or yoatzot halakha –female halakhic advisors on the laws of family purity.[iii]

The combination of higher learning institutions for women and more active roles in the religious community have led to tremendous changes in the status of women .Many feminist changes in the Modern Orthodox world have drawn widespread opposition and conflict within the community. As Sylvia Barack Fishman (2000) has described there is an "…. increasing troubled dynamic between Orthodox Jews who are committed to preserving a more traditional status quo and those women, men and rabbis who want to expand women's spiritual expression."Aryeh Frimer (2007) has noted that "There is hesitancy in the Orthodox community to adopt or at least tolerate practices such as women's Megillah reading and women reciting the mourner's prayer." An example of a feminist change which caused a great deal of opposition and conflict is the women's prayer groups and aliyyot (reading from the Torah in a quorum of men).[iv] According to Frimer (2007), the rabbinate has beenseriously split on the advisability of such prayer groups for a variety of hashkafic (ideological) and public policy grounds.  Read More…

[i] Modern Orthodoxy is a sub-group within Orthodoxy which synthesizes Torah traditionalism andmodern secular behavior.

[ii] For a full discussion on the sociological developments of feminism in the Orthodox world see SylviaBarack Fishman. (2000). Changing Minds: Feminism in Contemporary Orthodox Jewish Life. NewYork : American Jewish Committee. For an analysis of the theological aspects of these developmentssee Tamar Ross, (2004).

[iii] The translation of the term yoetzet halakha is a halakhic advisor. In order to avoid confusion in this article, I have used the Hebrew plural of this term – yoatzot halakha, when referring to more than one yoetzet halakha.

[iv] For a depth analysis of women's issues and modernity, see Joel B. Wolowelsky, (1997). Women,Jewish Law and Modernity: New Opportunities in a Post-feminist Age. Hoboken: Ktav.