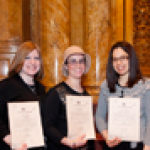 New York – In an effort to provide women with an extra measure of comfort and guidance in their observance of family purity, an Israeli institution which trains carefully chosen candidates on the subject of Taharas Hamishpacha and other related topics is about to graduate its first class of American trained advisers.

The women, known as Yoatzot Halacha, go through an intensive course of study under the auspices of Nishmat, The Jeanie Schottenstein Center for Advanced Torah Study for Women, whose Keren Ariel Halachic Institute has trained some 85 yoatzot over the past 14 years.  While the yoatzot program, under the halachic guidance of Rabbi Yaacov Warhaftig and Rabbi Yehuda Henkin, has been placing yoatzot throughout Israel since its inception, it has only recently begun appointing yoatzot in America.

While all yoatzot are certified by a panel of rabbanim in Israel, five American women bear the distinction of being members of the first class of yoatzot to be educated in the United States and will be officially graduating from Nishmat on October 27th.  The new yoatzot include Mrs. Lisa Septimus, Mrs. Dena Block, Professor Nechama Price, Mrs. Tova Warburg Sinensky and Mrs. Avital Weissman, who serve as yoatzot in the Five Towns, Great Neck, Manhattan, Philadelphia and Plainview.  Three other American yoatzot, Mrs. Bracha Rutner, Mrs. Shoshana Samuels and Mrs. Sara Cheses, who advise the Jewish communities in Riverdale, Teaneck, Tenafly, Los Angeles and at Yale University, were all educated in Israel.

According to Rabbanit Chana Henkin, founder and dean of Nishmat, the role of the yoetzet is to give women a greater comfort level when discussing issues of Taharas Hamishpacha.

“I taught Taharas Hamishpacha for years in many different communities and I found that women were hesitant to ask questions, which leads to both a lot of personal suffering as well as improper observance,” Rabbanit Henkin told VIN News.  “It didn’t matter what community I was in, be it Modern Orthodox, Yeshivish, Sefardi, a kibbutz or anywhere else, women find it very uncomfortable to speak up about Taharas Hamishpacha.”

Adding to their general reluctance to seek halachic guidance on something of such a personal nature was the discomfort of having to discuss these issues with a member of the opposite sex.

“Many women understandably feel uncomfortable bringing their questions about these matters to their rabbi,” explained Rabbi Tzvi Hersh Weinreb, executive vice president emeritus of the Orthodox Union who also serves on the Honorary Rabbinic Committee for Nishmat’s American program.  “Sometimes their reluctance has to do with the fact that the rabbi is a man, so that they are embarrassed to share intimate details with him. Sometimes they feel that he cannot empathize with the particulars of their situation. Sometimes they are simply intimidated by him because of his position of authority.  One way to resolve the dilemma that these women face is to provide them with other women, thoroughly trained in the specifics of the pertinent halachos, with whom they can consult. These women, known as yoatzot, are not only educated in practical halacha but are trained to be sensitive and caring and open to the concerns of women who are less knowledgeable or less observant.”

Rabbi Weinreb was quick to point out that while the yoatzot may be extremely well versed in their field, they are in direct contact with rabbanim and poskim.

“The yoatzot work closely with Rabbis in their community, consult with them regularly, and bring questions to them as they arise.  It must be emphasized that these women conduct themselves with exemplary tznius, modesty, and in no way function in a rabbinical capacity. They are teachers, advisers, and role models.”

It takes over 1000 hours of training for the women who are chosen for the program to become certified as yoatzot.

“All of the yoatzot have devoted two years of study towards Taharat Mishpacha and medical, psychological, social, and other halachic issues that can directly relate to a couple’s observance of Taharat Mishpacha,” said Mrs. Septimus, who was appointed by Nishmat as the Five Towns yoetzet.  Mrs. Septimus noted that the program involved approximately 15 lengthy written and oral exams.

“I firmly believe that the addition of Rebbetzin Septimus as a Yoetzet Halacha will be a wonderful asset to enhance observance and understanding of one of the most sacred areas of Jewish life,” said Rabbi Kenneth Hain of Congregation Beth Sholom in Lawrence.  “I heartily welcome this important development in the Five Towns Community.”

Rabbi Hershel Billet of The Young Israel of Woodmere noted that Mrs. Septimus would be filling a vital role in the community in her capacity as a yoetzet.

“The yoetzet is not intended to replace the halachic and personal relationship between local rabbanim and rebbetzins and their congregants on this very sensitive area of religious life.  Rather, it is our expectation that the yoetzet will support that relationship, complement it and enhance the observance of Taharat Hamishpacha in our community.”

Mrs. Shoshana Samuels, a yoetzet who is now in her third year of serving the Teaneck community, has gotten an enthusiastic response from local women and looks forward to having more American yoatzot.

“The feedback from women has been amazing, ” said Mrs. Samuels, who took over the role of Teaneck yoetzet over two years ago when her predecessor made aliyah.  “At this point, I get a lot of phone calls; four or five a day, sometimes even more, and our thousandth caller was reached after a year and a half. The idea is to have women with a solid background on Taharat Hamishpacha to work with people, so that when a question comes up either we know the answer or we speak to someone more experienced.”

According to Mrs. Samuels, many questions stem from a lack of knowledge in areas which are rarely discussed, leading women to err on the side of caution, something that may not be the right decision from a halachic standpoint.

“In one of our very first shiurim, the rav came in and explained that one of the biggest problems in Taharat Hamishpacha today is chumra.  Women don’t even know they are being machmir and it is a very big problem.  We provide women with a lot of education and so many times people have said to me ‘I wish I would have known this when I was younger.’”

Having the ability to contact the yoatzot by ways other than direct phone calls has also been beneficial.

“Email definitely helps women who are squeamish about discussing these sensitive and personal issues,” said Mrs. Samuels.  “Some women prefer texting. We try to be available to meet the questioners’ needs and comfort levels.”

Rabbi Kenneth Auman, dean of Nishmat’s American program, has been involved in the program since its inception, two years ago.

“It is a really difficult program and the women work very hard,” said Rabbi Auman.  “They need to go through all the relevant gemaras, rishonim, the Tur, Bais Yosef, Shulchan Aruch, Shas and Taz on their own.  After that, I give a shiur on the achronim, explaining various concepts in depth and Rabbi Gedalya Berger gives a shiur on the practical aspects.  In addition there are various lectures on women’s matters, given by experts, on psychology, fertility and any other topics that may be connected including abuse, gittin and agunot.”

Rabbi Auman emphasized that the yoetzet program is designed to help women properly observe a fundamental mitzvah that is the centerpiece of every Jewish marriage.

“It is important to know what the yoatzot are and what they are not,” explained Rabbi Auman. “They are not rabbis and they do not purport to be maharats.  They probably know hilchos nida as well as many rabbis and, in fact, the average rabbi probably doesn’t know as much on the subject as they do. When they encounter new situations, they don’t take it upon themselves to make the decisions but they call me, rabbonim in their communities and other affiliated rabbanim.  Experts in the field can get called as well.”

The fact that women are more likely to broach sensitive subjects with other women seems to be the key to the yoetzet program according to Rabbi Auman.

“These women get questions that I was never asked,” observed Rabbi Auman.  “The bottom line is women still feel more comfortable speaking to women.  I try to be nice and I try to be warm but there is no comparison.  I think that they really have promoted the observance of Taharas Hamishpacha in a very meaningful way.”

A second group of six American woman began their training this past summer in Israel at Nishmat.  They will continue their studies under the guidance of Rabbi Auman and Rabbi Gedalyah Berger in Teaneck at the Maayanot Yeshiva High School for Girls and hope to graduate in 2015.

“We are Baruch Hashem so grateful to have five new highly qualified Yoatzot Halacha to serve the Orthodox community in the United States and enable women to ask their most intimate questions to other women, maintaining the highest level of dignity and the highest level of halachic standards,” said Mrs. Atara Eis, who is herself a yoetzet as well as the program director for Nishmat’s American program.

“In my years serving as a Yoetzet Halacha in the United States, I saw how necessary it was to have more Yoatzot Halacha available for the communities, since the demand was far greater than the supply. Thankfully, Nishmat was able to fill this need with this branch of its Jerusalem-based program, which has been proven successful. I look forward to watching our Yoatzot Halacha continue to go m’chayil el chayil, as they improve Shalom Bayit and simchat hachaim for countless couples.”

RECONSTRUCTION IN NO MAN’S LAND

RECONSTRUCTION IN NO MAN’S LAND