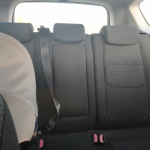 A few months ago, we were excited to see that one of our posts inspired discussion in different corners of Facebook. People raised a number of questions about the answer given by the Yoatzot, under the guidance of Rabbi Yehuda Herzl Henkin.

In response, we’d like to take the opportunity to explain the answer in greater depth and to address some of the issues it raised.

Stay tuned to the end of this post to see what we learned from you and how we have incorporated it into our answer.

The question deals with “harchakot,” or adjustments to the conduct of a couple when they are prohibited from physical touch during niddah. The question is:

Are my husband and I allowed to accept a ride from friends while I’m a nida if we know that, because of the baby car seat they keep in the back seat, we will have to either squish together or go through the awkwardness of asking them to rearrange in order to accommodate us?

What is the basis for the question? Vayikra 18:19 tells us that, “To a woman in her ritual impurity of niddah, you shall not approach to uncover her nakedness.” The Midrash Halacha expounds on the verse to prohibit touch during niddah, in addition to actual intercourse.

Rambam (Maimonides) and Ramban (Nachmanides) differ in their understanding of the midrash. Rambam maintains that touch is Biblically prohibited; Ramban considers it prohibited on a Rabbinic level.

We are more stringent about touch with a married couple during niddah than in other cases, since touch between them is more liable to take on an intimate tone. For example, a married couple do not pass objects to each other directly during niddah, in order to avoid the possibility of touch. Ashkenazi practice is for a couple even to avoid sitting together on the same couch if there is only one cushion and one spouse will feel the effects of the other’s movement on the couch — even if they don’t touch!

The questioner here describes a situation where the couple will need to “squish together” in the back seat of the car. This strongly suggests that the couple will actually touch for the duration of the ride.

If in fact the back seat is spacious enough for the couple to sit next to each other without necessarily touching, and there is no better option, they could place a substantial item between them to avoid touch as much as possible, and sit together.

But assuming actual touch is unavoidable, and given the close relationship between husband and wife, would it be allowed? It would be very difficult to argue that such contact would be fully permissible, especially if there are other options available.

Consider a similar scenario, but with a male and female stranger. We can readily imagine that the strangers would not want to be “squished together” and that the couple offering a ride might make an accommodation to avoid forcing them to touch. In our case, the husband and wife do not want to be “squished together” because of the prohibition during niddah (especially because they are likely to feel something intimate when pushed up against each other), and that can be accommodated.

II. Too Much Information?

The questioner wonders whether the likelihood of “squishing together” with her husband during niddah should limit her and her husband from accepting the ride. She clearly sees asking the car owners to rearrange the seating as a possibility, but one she describes as “awkwardness,” because she might not want her friends knowing about her niddah status, and also because it seems rude to impose on them to change the seating arrangements.

Reading the exchange, one might assume that it is prohibited to inform your friends of your niddah status. It’s important to know that this is not the case. As long as the laws of tumah and taharah were widely practiced, ritual purity was a matter of public knowledge, because of its practical implications when dealing with ritually tahor items.

Nowadays, when there is usually no practical reason for someone else to know of a couple’s niddah status, it is common for couples to choose not to share this information. Why is that? This is less a matter of halacha than of personal sensitivity.

Privacy about certain bodily functions, including menstruation, is completely appropriate. However, everyone knows that women menstruate, and sometimes one friend might mention it discreetly to another. Observant Jews also know that menstruation has halachic implications. Although it may feel embarrassing, there is no shame in being “caught” observing harchakot. And we can discreetly mention it to another woman when necessary.

As a separate matter, we do try not to disclose the actual mikveh night, because that effectively lets others know specifically when a couple will be intimate. Couples careful about that might also be careful about disclosing niddah status in general, treating it as part of the private realm between husband and wife. But there is no halachic requirement to conceal niddah status.

Here is the original answer on yoatzot.org to the questioner:

In this case, you should ask your friends to accommodate you.  If the husband is driving, your husband could ask to sit in the front to have more legroom.  Or he could say that he is feeling a little nauseous and would appreciate an opportunity to sit up front.

If the baby is not present for the ride, you could also ask them to remove the seat for your comfort.  (Promising to help them reinstall it on arrival might help convince them.)

If there is no alternative (or alternative ride), you could subtly explain to your friend and let her do the maneuvering for you. If none of these suggestions can be worked out, it is better not to accept the ride.

The answer accepts the questioner’s assumption that sitting in such proximity that would make them “squished.” Even if not a Biblical prohibition, there is a rabbinic prohibition at stake here according to most opinions, which the questioner is committed to observing.

For this reason, the first two paragraphs suggest ways to rearrange the seating, without explicitly announcing that they are currently prohibited from touch. These paragraphs take advantage of the permissibility of telling white lies to maintain one’s privacy about sexual matters (Rambam Hilchot Gezelah v’Aveidah 14:13) so that the questioner can resolve the situation without any halachic difficulty and without compromising her privacy.

Since sharing one’s niddah status with another person, especially when it can affect practical halachic observance, is permissible, we then raise the possibility of explaining the situation to the friend.

When all else fails, we say it would be “better not to accept the ride,” because a rabbinic prohibition is at stake, and because the questioner herself suggested declining the ride as a reasonable option. We did not write that accepting the ride is absolutely prohibited, in order to leave some flexibility for more pressing situations.

Rethinking this question, especially after seeing the discussion it generated, brought us back to an important responsum by Rav Moshe Feinstein (Igrot Moshe, Even HaEzer II:14). He permits a couple to ride together on the subway during niddah, even if they will be pushed against each other by the crowds. This might be read broadly to permit the couple in our question to accept the ride. However, it’s not at all clear that the two situations (mass transit with random external pushing and an alternative of being pushed against strangers vs. a married couple “squished together” in the back of a car, when there might be other options) are really equivalent. Elsewhere (Igrot Moshe Yoreh De’ah 1:92), Rav Moshe writes explicitly that if a husband and wife travel together in a car during niddah, they should sit at some distance apart.

We checked back in with Nishmat’s halachic decisors on this issue, and they stand by the original answer. However, in response to your comments, and in order to make the nuances of this issue clearer, we’ve added two new paragraphs to our posted question:

“If it turns out that the back seat is spacious enough for the two of you to sit next to each other without necessarily touching, then you can sit together if there is no better option, as long as you place a substantial item such as a purse between you.”

“If there are extenuating circumstances and none of these suggestions seems workable, please get back in touch with us, or your local Rabbi or Yoetzet Halacha, to discuss further ideas for troubleshooting.”

We hope these explanations have been as enlightening for you as your comments were for us! Thank you — and keep them coming!