Does the Mikveh Attendant Need to Watch Me Immerse? 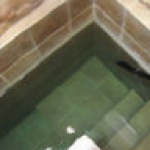 Recently, there has been increasing discussion about the role of the mikveh attendant. Some women are quite comfortable with the mikveh attendant and grateful for her help, but other women would prefer to enter the mikveh alone. The halachic question arises: Is it permissible to immerse without a balanit?

"A Jewish woman at least twelve years old needs to stand over her when she immerses, to see that none of her hair remains floating on the water. And if she has no one to stand over her, or if it is night [i.e. dark, with no light available], she should tie her hair to her head with woolen threads or with the band that is on her head – on condition that she loosen them – or with a loose hair net, or she should tie a loose kerchief over her hair."

Accordingly, the halacha is that another woman should observe the immersion.  But there is no halachic requirement that the woman observing the immersion be a professional mikveh attendant. A woman may ask the Jewish woman of her choice to supervise her immersion instead of the official mikveh attendant, and mikvaot should accommodate such a request.

Where no woman is available to watch the immersion, or where it is very dark, a woman with long hair can place a loose net over her hair, being careful that the water can still reach all parts of her hair and head, and then immerse alone. Alternatively, she can hold her hair with her hands as she enters the mikveh, and then let go of her hair under the water.

If a woman has no hair, or very short hair that cannot float above the water when her head is submerged, it is permissible for her to immerse without an attendant present. In these cases, it is still customary to immerse with a mikveh attendant, who can also identify other chatzitzot (barriers to immersion) that a woman might miss.

If a woman has longer hair, and has immersed with a loose hair net or holding her hair and releasing it underwater, her immersion is considered valid. However, as above, a woman with long hair should immerse with a woman observing her.

A woman who is uncomfortable being seen undressed may ask the attendant not to come into the mikveh room until she has entered the water, and to remain only for the time required to confirm that all her hair is submerged.  Moreover, if no other women are waiting, a woman should feel free to request time alone in the mikveh for a few minutes after her immersion, if she would like a private moment there for spiritual reasons. These steps, along with the possibility of bringing one's own attendant, often suffice to make women comfortable with this aspect of the halacha of immersion.

A woman who feels strongly that she does not want anyone to see her in the mikveh even when she is underwater should ask a specific halachic question. Different mikvaot set different policies, but a woman who is following a halachic ruling permitting her to immerse alone should generally be accommodated. In Israel, allowing women to immerse by themselves on request is now the law.