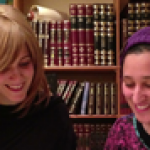 Rebbetzin Lauren Levin will offer guidance to women on issues including religious rights in marriage and the laws of family purity. She will work as a yoetzet halachah (halachic adviser) and has been appointed community educator and head of the women’s division at the shul, widely known as Kinloss.

The appointment is unique and a significant development for an Orthodox community. It comes amid a number of cases relating to rabbis accused of inappropriate behaviour and complaints about counselling sessions with female congregants.

Rebbetzin Levin is a graduate of the Nishmat Yoetzet Halachah programme, which trains women to offer guidance on areas of taharat hamishpachah—– encompassing aspects of marriage, sexuality and women’s health.

Rabbi Mirvis said the community was keen to “send out the right messages” about the role of women in shuls.

He said he wanted to improve the situation where rebbetzins currently only informally advise women who approach them.

Rebbetzin Levin will continue as an associate rebbetzin at South Hampstead Synagogue.

Kinloss chairman Jon Mendelsohn said: “There can be situations where a woman would rather discuss matters with another woman — so this is what we have responded with.”